The European Union General court TGUE has prohibited a cafeteria’s graphic trademark which is circular, has a musical note in the centre and the words “COFFEE ROCKS” written on it. Because it is similar, mistakable or associable with the STARBUCKS brand. 16th January 2018 judgement: STARBUCKS / EUIPO & Nersesyan, T-398/16. 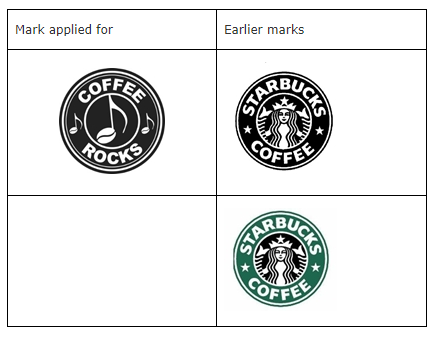 The European Union Trademark Regulation prohibits trademarks, for products or similar services to preceding trademarks if it is likely to cause confusion between them. A trademark can be rejected, if the previous brand is renamed and the new brand could benefit from the previous brand.

Starbucks opposes the trademark, using their trademarks as a basis for dispute:

The question was discussed in the European Union Intellectual Property Office EUIPO, which finally decided that the trademarks were different and could coexist in the market.

Starbucks appealed to the General Court. It was decided in the judgement of 16th January 2018 that the brands could not coexist in the market. It states that a joint existence of the two brands in the market could lead to confusion.

The overall vision requires evaluating the visual, phonetic and conceptual similarities of both brands, taking into account the general impression and the distinctive elements.

According to the General court, the average consumer perceives a brand as a whole; they do not make detailed analyses. Thus, two brands are similar, if they are only partially similar, even if they have distinctive elements, such as “STARBUCKS” and “COFFEE ROCKS”.

Both brands contain the word “COFFEE”. Although they may be a “descriptive” word, it is dominant in the overall vision of the brand, which stands out to the consumer.

The risk of confusion increases, by the large similarity of the services: cafeterias.

According to the General Court, by comparing brands, the words are more distinct than the figurative elements. But there is a high risk of confusion between both “cafeteria” brands for multiple reasons: the general aspect, the link between the trademark’s dominant words “STARBUCKS” and “COFFEE ROCKS” and the use of both brands of the word “coffee”.
Will STARBUCKS end up monopolizing (black) circles for coffee shops?

RSS feed for comments on this post. TrackBack URL